Senegal is one of many west African countries that were used as a base to ship off slaves to the new world. Being located on the coast, and having a relatively central location mean’t it was a good location for the European colonizers to organize their horrible slave trade.

The history of slavery in Senegal goes back to around 1450 when the Portuguese landed for the first time and colonized the area. From 1450 until independence in 1960, Senegal has been under changing colonial rule by the Portuguese, Dutch, French and English. The French were the last colonizers, being in charge from 1763 until independence in 1960 – and that’s why Senegal is a francophone country today.

Slavery happened continually all through the colonial period, or at least until slavery was abolished in 1802. That’s some 350 years of shipping slaves out of Senegal. Let that sink in. And it only stopped some mere 200 years ago.

The slave handling operation in Senegal was centered on the little island of Gorée, which lies a few kilometers offshore from Dakar. The slaves were brought here, kept locked up and enslaved while being prepared for being shipped across the atlantic, never to return again. The slaves would be locked up in massively overcrowded rooms, separated by genders. Children were also locked up and shipped off. The conditions under which these poor souls were held were absolutely inhumane, needless to say. No sanitation, no privacy, and being worked hard during the day. The slaves were kept on the island and while also being fed up, until they reached a certain weight threshold, both to ensure they would survive the arduous trip across the atlantic, but equally so to be effective slave labor on arrival.

The story of Gorée and slavery in general is a dark chapter in our common history, and as a European person, it was especially important for me to face this horror right on. It’s important to own up to your own ancestral past. Only by learning from the past can you improve the future.

In the modern day, Gorée island is now a designated UNESCO world heritage site, meaning that it is protected, which again means that the island looks like a cozy little colonial french town with colorful buildings and beautiful beaches. But looks are deceiving of course. The fancy buildings were for housing the colonial administration while the slaves were kept in cumbersome conditions. Gorée is still inhabited by about 1300 people to this day, and the main source of income comes from tourism and fishing.

Getting to Gorée is a fairly easy and quick feat. It is one of the main activities to do in/around Dakar, and it does make for a good half day trip away from the hustle and bustle of Dakar. There’s several boats going all throughout the day between the Dakar harbor, and Gorée, the first ferry leaving from Dakar around 7am, and the last ferry returning from Gorée after midnight, with boats going at least once an hour. A return ticket costs about 5 euros.

It takes about 15 mins each way by ferry. Upon arrival you have to pay a tourist tax of another few euros, which is fair, it is a UNESCO heritage site after all. They then also try to sell you a official guide to show you around. I believe I paid 8 euros for the tourist tax and the guide in total. Getting a guide will be useful, especially if you don’t understand french. Just be prepared to be dragged to a lot of his friends shops to be offered souvenirs. My guide dragged me through at least 3 different shops where it seemed there was an expectation for me to buy something.

The island is so small that it can easily be traversed in a few hours, and it is easy to find your way around, guide or no guide.

The main site relating to slavery is the house of Slaves, which is the final destination for the slaves. From this house, they went through the Door of No Return, a literal door opening up into the eternal atlantic ocean, from where they were transported in small boats out onto larger slave vessels, to be shipped off to America, the Caribbean or South America. You see the rooms in which people were kept, jail cells, the door of no return etc. There’s also a small museum that is worth visiting, although all the information here was only available in french. Just outside the house of slaves stands a small monument of two African people, entitled “Break the Chains”. Its a man and a woman embracing, with the main lifting his arms in the air with broken slave-chains, symbolizing the abolishment of slavery, and the reunification of African families. The statue was donated by the Caribbean island of Guadeloupe back in 2002 to commemorate the 200 year of abolishment of slave-shipment from Gorée. A significant amount of slaves from Gorée ended up in Guadeloupe, so there’s a special bond between these two islands to this day, which is why they donated the monument. 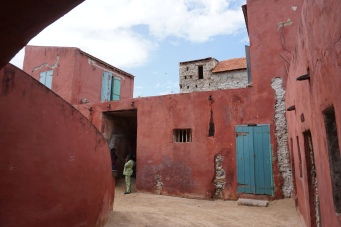 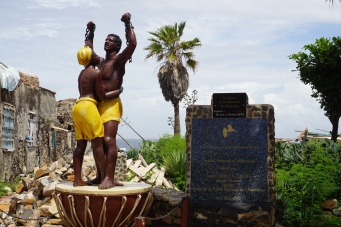 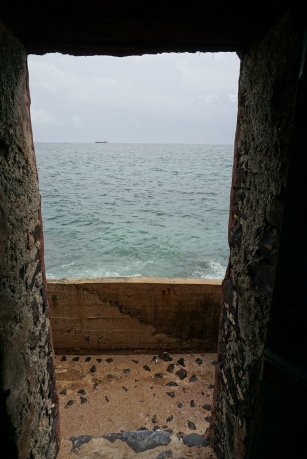 The town itself is, as mentioned, a beautiful and well preserved french colonial island town. Walking around here offers pretty views. But taking the dark history of the place into consideration humbles one quite a bit.

Finally you can walk up to the highest point on the island, on which is a World War 2 bunker and a giant 2-barrel cannon. This was built here by the Vichy French to protect against seaside attacks. It’s quite a massive weapon, and well worth walking up to check out. From this place you also get a good view of the island, and another monument to slavery. Beware however, that the ramp leading up to the bunker and vantage point is full of souvenir sellers doing their best to sell you stuff. Actually these sales persons are all over the island, and it can be rather frustrating at times to be constantly aggressively approached by sellers. 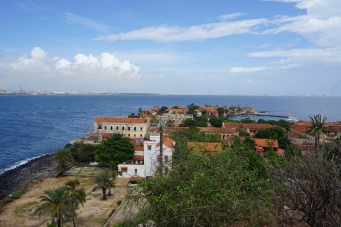 At the end of the guided tour we ended up back at the harbor area where all the restaurants and cafes are located. As a finishing touch, my guide brought me to his own family’s restaurant. At this point I was indeed a little hungry, so getting some fried rice with shrimp was great. The guide asked for me to buy him some food as well, which I agreed to a little hesitantly. When he then further asked for another money tip I straight up told him no. I had already paid for his service at the start, spent a bunch of euros at his friends shops, and bought him lunch, so I wasn’t about to spend more money. Might be tough, but there’s got to be a limit.

When we parted ways, there was still another 45 minutes to go until the next ferry would return to Dakar, so I set out on my own to explore town a bit more and snap some more pictures, and explore parts of the island that we didn’t cover on the tour.

Time quickly passed and before long I was back on the ferry heading back to Dakar. Experience and knowledge richer. Going to Gorée is a must when in Dakar, you just got to be ready to deal with a lot of hustlers. When you leave the main tourist-trail and harbor area, they do thin out quite a bit, so it is still possible to walk around the town without too much hassle.