In Senegal I had the option to either take a short flight down to the southern Casamance region of the country, OR taking a 15 hour overnight ferry. For a guy with an adventurous heart the choice was obvious! Ferry it was!

The Casamance region is the very southern part of Senegal that lies below the Gambia. It is inhabitted primarily by the jola tribe, which is different from the rest of the country. They have led some violent insurgencies toward gaining independence from the rest of the country, in the first 2000s. These incidents are pretty much not happening anymore however, and Casamance is perfectly safe.

One of the top destinations in Senegal as recommended by Lonely Planet is Cap Skirring, which just so happens to be in Casamance. That was my only motivation to go there. Also because it is definitely off the beaten path in an already off the beaten path country. Two day beach vacation in unexplored territory seemed perfect!

Now there was just the journey to get there. As laid out, I would take the ferry from Dakar down to the main city of Casamance, called Ziguinchor. From there its a short drive out to the coast and Cap Skirring. But this trip takes 15 hours by ferry, so its definitely some investment.

The first challenge already showed up when obtaining the ticket for the ferry.

In Senegal, basically nothing can be done online, and getting a ferry ticket is no exception to this. So I had to go down to the harbor and buy a ticket in person, what year is this?! Anyways, I was already going to the harbor to catch another ferry out to Ilé de Goree for the day, and had to wait 1,5 hour for my departure, so it was convenient to settle this business meanwhile.

The very first problem is that Senegal is a francophone country, and english isn’t widespread at all. And I don’t speak any french of note. After trying and failing for a while to explain that I wanted a ticket to Ziguinchor for thursday night, and that I wanted a cabin, another person that knew english luckily showed up and helped us communicate. It did turn out however that even though I was 2 days early all the cabins were already sold old. So I was left to take a sitting seat ticket. Having no other option, I agreed to this arrangement, fearing a horrific 15 hours stuck sitting on horrible wooden seats on a old dank ferry – fears that would luckily be put to shame, the seating arrangements would turn out to be nothing short of amazing, but more about in a bit!

The ticket for this 15 hour journey costs a mere 20 euros, while a cabin ticket – if there’d have been any available – tops out at about 35 euros. All in all its an inexpensive and interesting way to travel rather than just sitting in a plane for an hour. 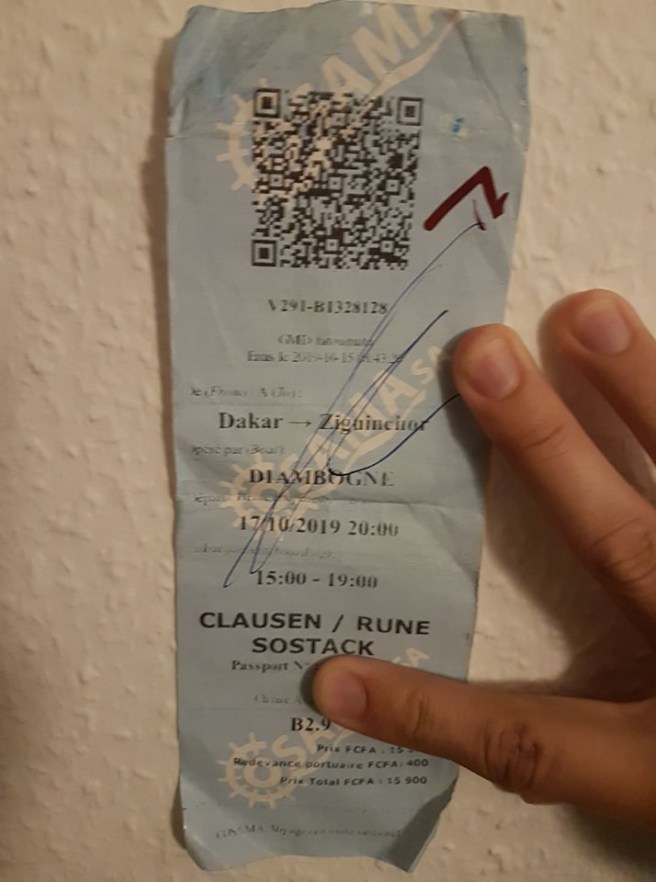 Boarding and the surprising comfort

When it became thursday night, I set out for the harbor ready to board this next great adventure. The check-in is pretty simple, merely showing your ticket, and as a foreigner your passport, and dropping your bag off at the bagging handling where its marked and loaded onto the ferry. Then you pass through security where your carry-on luggage is scanned, and then you’re set! I arrived a few hours early because I didn’t have much else to do, so I spent the next 2 hours in the terminal watching more and more people show up. In the end we were a mere 3 foreigners on the entire boat. Using the ferry is definitely the more unconventional choice.

When the clock reached 19:00 the boarding onto the ferry started, with an expected departure time of 20:00. My ticket told me to go deck 2 and find seat B9. I was very skeptical as I approached deck 2, but then I entered the hall with the seats and to my great relief, rather than rows of wooden benches, the hall was decked out with rows of very comfy cinema-style chairs, with 2 big televisions in the hall as well. It looked to be a very comfortable night after all! My designated seat put me right in between other people, which would make it a little awkward to sleep, in a sitting position. But as it turned out, the hall was very thinly populated as the ferry departed, and so the other seats were free for taking. The entire row in front of me was free, and so I moved up there, having several seats all to myself allowing me to lay down and sleep. Sweet! 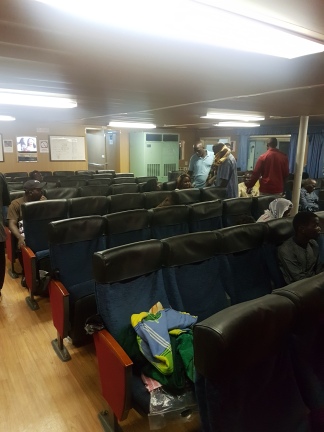 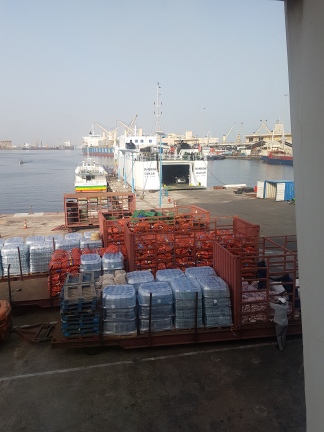 It was already very dark by the time we departed, and as soon as made our way out of the Dakar harbor area, all that was left was the immediate vicinity around the ferry, everything else was completely dark as we cruised through the dark waters of the atlantic, southbound. The televisions initially showed news programs in the local Wolof language from the big Grand Magal pilgramage/religious festival in the city of Touba taking place that same night (one of the biggest gatherings of people in the world!), but would after midnight switch to showing pirated movies all night.

It was actually fairly annoying that the TVs were just kept blaring loud movies all night. And when one of the other foreigners went and pulled the plug of the TV, it didnt take long for somebody to replug it. So we were stuck with this loud disturbance. I still managed to sleep through it, at least a little bit. The seats were pretty small and it was hard to lay down properly without falling off, so I also tried sleeping right on the floor, and in various positions. It was all pretty cool.

I also took a few trips outside walking around the ferry, and the big open-air deck at the end of the ferry hosted a big party most night it seemed, with people sitting on carpets, cuddling up in groups, sharing tea and coffee and probably having some sort of Grand Magal celebration. It was very cozy.

I had read beforehand that it might be possible to see wild dolphins follow the ferry on this trip, so I kept staring out towards the sea, but never saw any. Sadly.

There was also a restaurant onboard, but having been warned beforehand that the prices there would be ridiculous, I had simply brought my own snacks and drinks along, and actually didn’t even go to the restaurant at all.

So while the ferry trip mostly went above all expectations, and I’d do it again any day, it of course had to turn bad in the end. But mostly of my own making. Around 5AM my stomach started to become very unruly and I had to make a hastened toilet visit. Here’s the thing. For each sleeping hall, there was 2 toilet stalls per gender. On the males side, one of the toilets had at this point been jammed and thus unusable. So we were left with 1 functioning toilet at this point. At this first stomach-attack at 5AM it was no problem, but it wouldn’t take long before people started to get up for the first prayers of the day, and then queues for the toilet started occuring.

I did have immodium with me, and immediately started taking them after the first run. It did help a bit, but over the next few hours there were still a few more toilet runs. In the end I survived without any serious incidents, althought it did come close a few times. But that’s all part of the ferry experience!

Along the Casamance river to Ziguinchor

The destination, Ziguinchor, lies about 100 km inland (by river-ways, its about 70 km by road) from the coast, but lies on the shores of the huge Casamance river. Thus the last few hours of the journey goes along the river into the country. We entered the river about the same time as the sun rose, giving good views of the surrounding shores. I hoped to see dolphins here too, but once again I didn’t see anything.

The morning was mostly spent trying to stay calm, and calm my stomach since I knew I would have at least an hour in a vehicle coming up before I would reach toilet-safety again. As we approached and eventually landed at the small harbor in Ziguinchor around 11AM, my stomach had been put into a immodium-induced peace.

As we departed the boat, and the nice cool air-conditioned sleeping hall, the heat of the tropical south slapped us right in the face. Here at almost mid-day the weather was if anything even worse than it had been back in Dakar. The humidity was higher, and the temperatures were higher. It was quite horrible to be honest.

Just to make things even worse, we were then taken into the small terminal building – which wasn’t air conditioned, and thus very hot – to wait for our bags to be taken off-board. In the heat, it felt like it took forever, but in reality it probably only took about 15 minutes. Finally we could go and grab our bags and get on with our travels. Unfortunately all the bags were just thrown out on ground without any system or order, so finding your bag amongst the 100-200 others was quite a task.

At last I succeeded in finding it, and I left the terminal building feeling pretty great about having survived this journey, and looking forward to my rapidly approaching beach vacation coming up next!