Read the first part of the series of my trip to Svalbard here!

The second day on Svalbard was also the one with by far the worst weather. Actually very non-arctic-y weather! It was overcast the entire day, with temperatures hovering at 1-2 degree celcius (yeah, not negative!) – in the deep arctic, in December. That is just outrageous, and was so unexpected. This also meant that it was raining throughout most of the day. Not heavy rain, just light drizzles, but still not at all what I had expected. In the evening the temperatures did start to quickly plummet, and the precipitation turned into a sleet storm instead.

This unexpected mild weather also meant that the plans for the day got changed around.

First off, waking up at 8am and it still being completely dark outside, after already having spent an entire day plunged into darkness was a really weird feeling. It felt like I had just gone to bed the previous night, and woken up a few hours later on the same night. The polar night starts to toy with your mind right away.

I got some excellent breakfast at the hotel, some müsli, waffles and bread, before being picked up for the first tour of the day, which was originally supposed to have been a 6 hour hike out to a mountain called Sarkofagen and back. But as the company came to pick me up, I was informed that due to the thawing conditions, there was a great risk of avalanches on the trip, so we would have to re-schedule. In cooperation with the 4 other participants on the hike, we decided to instead go for a hike out to a coal mine near the Advent valley. A route that was long, yet flat. But with the thawing snow, it was still a physically exhaustive trip. Our guide, Nana, brought along her husky, called Grum, which is the norwegian version of “The Grim” from Harry Potter. Grum was very cute! Along with Grum, she – of course – also brought her hunting rifle, to fend off any polar bears that might or might not show up.

We drove out to the Polar bear warning sign, put on some snow shoes – which was also the first time I’ve ever tried to use such – and started the hike along the foot of the mountains. The trip was long, and the snow shoes was also uncomfortable to walk with, and I’m pretty convinced they gave me a big blister on my left foot! 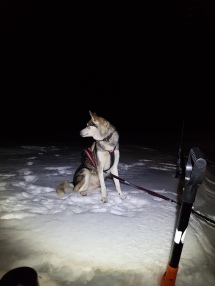 Grum, with a fallen coal-cart

On the way we had multiple stops to look at animal tracks in the snow, arctic foxes, birds, reindeer. We also had a stop at some of the cable cart towers that were used to transport coal from the mine back to town. They are not operational today, but still stand tall as steel megaliths out in the winter landscapes. The landscapes themselves were dotted with huge mountains on all sides, and a big flat plain in between these mountains. Out on this plain, were also the artificial lake which stores all the drinking water of the city. It was hidden by the snow, and so we attempted our best to not accidentally fall into it!

In the distance, the coal mine number 7, that I had visited the previous day, was lighting up. Even though we were wandering in a isolated area, far from any street lights, the silhouettes of the mountains around us were still easily visible. Truly a stunning landscape to walk through.

After about 2-2,5 hours of hiking we reached our turning point, the “Vinkel station” or “Angle station” where the cable carts would make a sharp turn. Here we made a small encampment in the snow and had our lunch. The lunch consisted of yet another one of these wilderness survival dried-food packages, prepared with hot water from thermos. It was delicious, and very cozy to sit out in the middle of nowhere eating. During our lunch, Grum would sit and stare off into the distance very intent on something. Nana didn’t pay attention to it, but I was a little scared that he might have caught the scent of a polar bear or something, but as it turned out it was just a few reindeer in the distance! Very cute!

The way back to the car would go through the other side of the valley, by first crossing through the old airport, where buildings and some plane parts are still laying scattered around. There wasn’t much left of the airport to see, but the place offered a great spot to take out my tripod and attempt to snap some pictures of the surrounding mountains. With varied success. 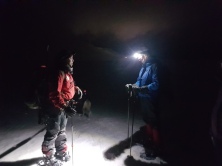 The next 2 hours or so would be spent walking back to our point of origin through the dark polar night. What a splendid hike it was.

On the way back I was dropped off at the supermarket in town, and bought some more of the dried food, as well as some drinks and snacks, in preparation for the next 5 hour hike the same evening – this one to a ice cave. Or so I thought.

After walking the 40 minutes back to the hotel, while also snapping a bunch of pictures, I casually checked my mail, and saw that I had received an email from the tour company informing us that tonight’s tour had been cancelled due to the weather – it being plus degrees meant that the ice cave was filling with water and becoming increasingly slippery (quite ironic), but the hike to the ice cave was also having avalanche warnings issued. So suddenly I had the night off! Which at that point I was honestly happy about seeing as how beaten up my feet already were from the first hike. It would have been amazing to venture through an ice cave certainly, but that must wait till the next time.

Instead what I decided to do, was to go back to the supermarket to buy even more supplies and snacks for the rest of the night, but also go on a small photo tour around town. With my tripod in arms, I set off towards the town again. I was under time pressure to reach the shop before closing time and so didn’t stop for photos along the way this time.

After I bought the items, I set out through town with the main objective of reaching the harbor area to get a good shot of the entire Longyear valley, with the mountains on both sides, but unfortunately the weather was rapidly declining, and a sleet storm soon made its way through the valley, obscuring the view and making it impossible to get a good photo.

Getting pounded by hail pellets with strong head-winds, I continued out and around town, making my way past the university, past the powerplant to finally reach the church located up on a small hill. Here I sought refuge from the elements for a bit. The church is open 24 hours a day, and provides both warmth as well as a toilet, so it is a really great little sanctuary.

After recuperating a bit from the weather, I set right back out. Given that the church is located on a small hill, it also provides some great views of large parts of the city, with one of the mountains in the background. So more Pictures were taken here! Granted with a rapid effort to keep the lens dry and clean. It was a losing battle. 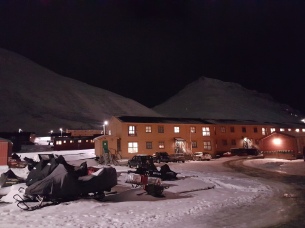 The walk home kept getting worse and worse, as the headwinds and pellets of hail kept increasing, both hurting my face and cooling me down. The last stretch of the way back to the hotel goes through a flat and open area, where the winds show no mercy. It was grueling and I was more than happy to reach the hotel and crash in bed.

The next day, I would be flying back home at 2pm, but checkout from the hotel was at 11am. Thus I wanted to take another walk around town early in the day, once again hoping to get a good shot of the Longyear valley after the weather had cleared.

So when I woke up at 5am, I decided to just go for it and head out to walk the city. It was almost the reverse route of the previous night, first heading down to the church, but with a lot of photo stops on the way, as the sky had now entirely cleared out. In fact, the temperature had plummeted down to -15 degrees, with a chill factor of -25. This combined with the thawing from yesterday meant that many of the roads were covered in slippery ice, making for an altogether interesting walk.

I got to redo a lot of the photographs from the previous night, and take even better ones. After the church I once again made my way down to the harbor area where there’s a good spot to take a photo of the whole valley. Reaching that spot and seeing the Longyear valley stretch out in front of my eyes, with majestic mountains on both sides struck me with awe. Truly amazing! From the spot, I walked northward into a small depression that is entirely devoid of houses or structures, making it a fairly big, but dark and barren place inside the city. From here the views of the mountains continued to baffle. But I was also starting to be seriously frozen, as my gloves aren’t really made to withstand temperatures of -25 or less. So I made my way back to the church for some warmth before heading back to the hotel for breakfast. 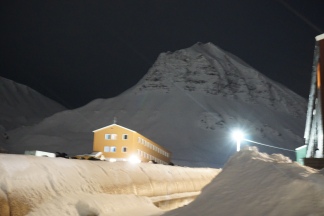 But on the hill leading from the depression up the church I was suddenly startled by something moving around, while I was busy snapping yet another photo of the city. I quickly turned around fearing it would be a polar bear. But luckily it was very cute and beautiful reindeer that had wandered into the gulch. It was just walking around trying to find some food underneath the snow. It barely noticed my presence. I sat down and started shooting pictures of it, and eventually it walked towards and straight past me. Another reindeer joined it, and eventually they made their ways back to the mountains. I was stunned by having been literally less than a meter from a reindeer. What a majestic animal! Even without antlers!

After this encounter, I went into the church again with some very frozen fingers.

I quickly made my way back to the hotel after warming my hands a bit. By the time I returned, the sky had cleared entirely revealing all the beautiful stars. I stood outside nearby the hotel for a while hoping for northern lights to show up, but nothing happened and eventually my hunger beat out, and I went inside to have some breakfast after almost 4 hours out in the cold. 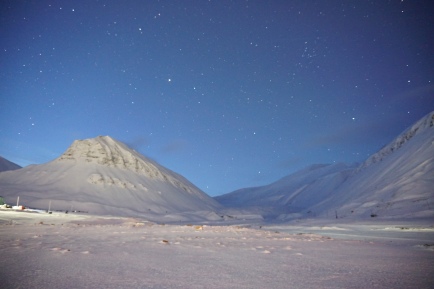 Then I went out looking at the stars a bit more, before ultimately have to return to pack up my stuff and check out. The last 1,5 hours was spent in the common room of the hotel staring out the window hoping for more northern lights, but none showed up unfortunately.

Then the trip was over and I took the bus back to the airport and flew home to Copenhagen through Tromsø and Oslo.