This is part 3 of 3 in my series about my 2018 trip to Lebanon. For other parts click below:

On my final day in the country, my aim was to head south, and see this part of the country. So once again I ventured off  to the Kola-junction, still with a big cold leaving me with a runny nose and stuffed head. It wasn’t fun in any way, but I wasn’t about to let this stop me. The south of Lebanon is a little special, in the way that it is the hezbollah heartland, meaning that there is strong Iranian influence and presence here, and it is not unusual to see big pictures of Ayatollah Khomeini in the streets, although this only happens in the deep south around the city of Tyre, which is not too far from the Israeli border.

My first stop of the day was exactly Tyre (called Sour locally). Just like Tripoli, Tyre is a city that isn’t very well visited by tourists, probably exactly because of the strong presence of hezbollah and pro-iranian factions here, which are probably seen as a threat, while in reality they are more of a political faction than an armed group in this  country, and pose no immediate risk to anyone.

Being so close to Israel also means that Tyre has a great amount of Palestinian refugees, living in permanent refugee camps, turned into city quarters, that are however still walled off from the other parts of town. I accidentally accessed a Palestinian refugee camp when I thought I had found a sneaky shortcut. The people did look at me quite funnily, and the soldiers standing guard at the official entrance wasn’t too happy when I came wandering out. Oops. 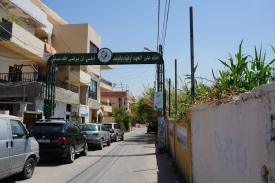 The city of Tyre, like most other cities in Lebanon, has a rich and long history. It also goes back to Phoenician times, but also played a very important role as a trading city during Roman times, and was just as big and important as other Mediterranean port cities like Cadiz and Carthage. Now, all that’s left of the glory of old times are 2 archaeological sites. The first one, located right next to the aforementioned Palestinian refugee camp, has a great amount of grave-tombs, pillars and a well preserved hippodrome. The site is very large, and mostly there’s no shadows, so walking around in sweltering heat while also suffering from a very stuffed head did ruin the experience somewhat, but the awe of the location was still unmissable. I stumbled into more tourists than in Tripoli, but the grandeur of these ruins deserves more visitors. 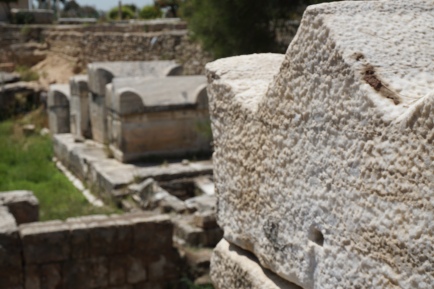 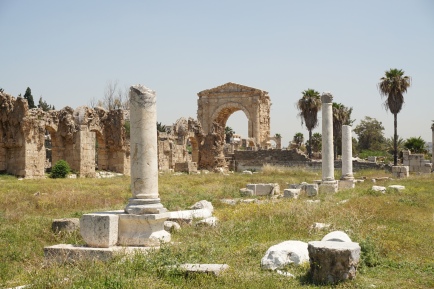 The second site is located close to the modern city of Tyre, and is also right next to the coast. It features a bunch of big impressive columns, leftover from a temple that stood right next to the ocean. So now they act as beautiful markers on the path out to the ocean. Looking down a path dotted with columns on both sides, and the ocean right ahead is indeed a magnificent view, almost as if straight out of Game of Thrones.

My cold compelled me to move on to the next town as fast as possible, and so after a few hours in Tyre soaking in the splendor of its ruins, I continued on to the next city, which is closer to Beirut, the city of Sidon (locally known as Saida). It must be mentioned that all these trips were made with small mini-busses where you sit fairly crammed up with strangers. Tourists usually don’t use these methods of transport, and as such I was the only tourist, and I was sitting there blowing my nose the entire time. I feel sorry for these poor Lebanese people who had to suffer this foreign bacteria bomb!

The city of Sidon is yet another coastal city with a long and rich history. It is a bit closer to Byblos in terms of tourist-activity, but still far from those exact levels. This is primarily due to Sidon not having as many and as impressive sights as Byblos. The main sight is the “Crusaders Sea Castle” which is an old fortress built off the coast, in very rough waters, which is now connected to the mainland through a walking bridge. The castle itself has survived centuries of being beaten down by the ocean, and is still standing mostly intact. Experiencing the waves crashing into the walls and landing grounds of the castle is almost hypnotizing. But being slightly out at sea, the castle is also hit by extreme winds at all times, and the castle itself is poorly isolated so even inside you’ll get wind-swept most of the time. This is especially unpleasant with a cold, but I was still compelled to stay around for a while looking at the wrath of the ocean. 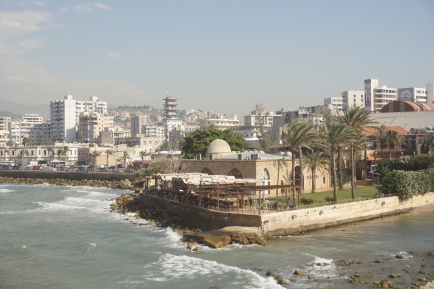 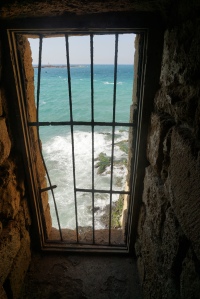 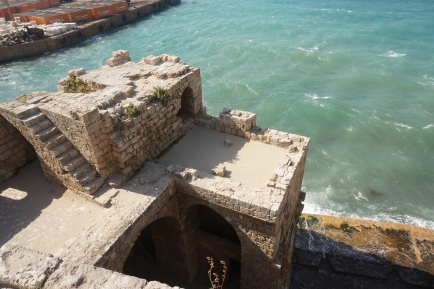 Back from the castle, I had lunch at the Corniche, before venturing into the city to explore a bit more. There isn’t a lot of sites worth mentioning here, and I mostly just strolled around the old town, and the bazaar. But I did make it into the Khan al Franj caravanserai, which now functions both as a museum and a school – students were taking exams at my time of visit, so I was told to be quiet. The building has 2 floors and is in beautiful classical architecture, but there isn’t a whole lot to see here beyond the building itself.

In the inner city i stumbled across another old run down castle which was standing in a green space surrounded by a fence. The official entrance into the grounds looked like it had been closed down for a long time, as it was very run down and rusty (the turnstiles). I found a back-entrance where a gate in the fence was left open, and as the daredevil I am, I ventured inside. The hill on which the castle was standing on was clearly neglected, being overgrown with tall grass and weeds. I was still able to enter the castle, but inside was some sketchy scaffolding, so it was probably quite a risk to walk around, in fear of sections collapsing on me – I also didn’t fancy being known as the guy who destroyed parts of an old castle. And yet, I still climbed the stairs to the top to have a view of the city. Not much of a view as it turned out, and so I quickly left the castle and sneaked out of the grounds again, also slightly afraid of being stopped and questioned. But nobody stopped me, and before long I was in a regular bus on the way back to Beirut. Still with a messy cold going on. The cold did however slowly dissipate towards evening.

In the evening I had a meeting with yet another friend, this person I only knew from online however. He’s a student at the American University of Lebanon, and suddenly an opportunity for me to visit the university presented itself. We met at the Corniche, before he took me into the Campus, by convincing the guards to let me in as his guest. Success! He walked me all around the campus, through the different faculties, the old church, and the main student halls etc. It is a really big campus, and it is entirely walled off. Quite interesting. After having toured the campus, we went for a streetfood snack. Then my new friend suggested me some other anti-cold drugs, which he claimed was more potent than the ones my other friend had suggested. So I got some of those as well, being very desperate to get entirely rid of my cold before flying to Oman the next day, since flying with a cold is one of the worst experiences ever as ones ear-drums almost rupture due to the pressure changes and liquid in the ear.

Can’t say if it was because of the new drugs, but the next day i felt refreshed and the worst part of the cold had passed luckily. Thus my flight became slightly less horrible.

And so my incredible hectic 5 day journey through many parts of Lebanon came to an end. It is an immensely interesting country filled to the brim with history and historical sights, it packs such a giant punch for its tiny size, and you could spend days in each part of the country just exploring. I could’ve easily spent a lot more days here to see everything I wanted to. The people are all kind and open, and the society as whole is extremely diverse, and all different sorts of livelihoods are accepted and welcome. People get along peacefully, and most places are safe. But unfortunately conflict is always a possibility in this volatile region. But with common sense and following ones instincts it is very much possible to safely and hassle-free navigate this interesting country. It is definitely a good, and easy entry-point into the middle east.

This is part 3 of 3 in my series about my 2018 trip to Lebanon. For other parts click below:

One thought on “Criss-crossing the Paris of the East: Part 3 – The South”