During my trip to the Republic of Moldova, my main interest wasn’t actually going around Moldova, but rather visiting one of the last true communist states in the world, which is located right here in the heart of Europe. I am talking about Transnistria.

Transnistria is a unrecognized break-away republic that is officially recognized as being a part of the Republic of Moldova, but unofficially is entirely self-governing. This is already a good starting point for an interesting trip, but Transnistria has another trick up its sleeves, which makes it even more unique. The Soviet union never collapsed here, and it is still living happily as a communist society.

While being self-governing, there is still a massive influence from Russia to be found in this territory. This affects all layers of society, right from the political elite, through to the military. To understand why Transnistria exists at all, and why it is still a communist society after all the soviet countries imploded, one must look at the history of the place.
Transnistria was created in 1924, shortly put, to be a Russian bulwark on the western-front towards the rest of Europe. This is due to Romania at this time not being under Soviet influence, and wanting to re-unite with its old territories of modern day Moldova. Thus Moldova itself was not a entirely safe border-frontier for the Soviet Union, as the romance with Romania could be too strong. During the entire life of the Soviet Union, there was no real conflict going on with Transnistria. But then when the Soviet Union collapsed, the same problem became relevant again. Russia wanted influence with Moldova to have a stable western frontier, and to avoid NATO encroaching too close to the heartland. So russian soldiers were sent in to create conflict and divice between the Moldovans and Transnistrian people. When the Moldovans sent in soldiers to create stability, the Russian used this as a pretext for claiming Moldovan hostility, and moved in and Seized not just the land past the Dniester river (that is where the name comes from “TransDniester-ia”, but also the town of Tighina (now called Bender) on the western bank of the river. This is still the situation today.

While there is no more active conflict, there’s still russian troops around, and strong russian influence. Working to keep Transnistria as a russian satellite, because it grants them immense power over Moldova as well. As long as Transnistria remains, Moldova cannot join the European Union or NATO, as they don’t have control of their own borders. Having Russian troops right on their doorstep of course also gives Russia leverage over the government in Chisinau.

That is basically the super simplified and shortened history of how and why Transnistria exists.

Enough history! Let’s talk about how it is actually like inside Transnistria!

I went with a tour company from Chisinau, just to be sure to not be caught up in some problems. The drive to the border of Transnistria takes about 1 hour and 20 minutes from Chisinau, and the roads there are fairly small and not the most well-maintained roads around. The conditions of the roads only gets worse as your approach the border.

As you approach the border, you have to pass Moldovan checkpoints, that are not actual border-posts, but still works like it, kinda. Mostly you just get waved directly through and don’t even have to show your passport yet – as you’re not technically leaving Moldovan territory. They do serve the purpose of giving people coming from Ukraine through Transnistria a proper Moldovan entry-stamp, as you don’t get one when entering Transnistria, and would as such be illegally in Moldova. A bit further along the road you reach the unofficial border-crossing, where Transnistrian soldiers will check your passport, and give you the migration card that grants you access to Transnistria. My migration card only granted me 10 hours entry.

You do not get a stamp in your passport, since they don’t have any legal right to issue stamps. The physical border crossing includes big banners and the Transnistrian flag, flouting their communist message. Already at the border your get the first taste of whats to come. Right across the border, there’s a big sign welcoming visitors in english. Who would’ve expected that!

The first stop we had was in the town of Tighina or Bender according to who you ask. In Moldova this town is known as Tighina, while the Transnistrians themselves call in Bender, which is russian for “the city on the bank of the river” essentially. This is a city of about 100k people, which makes it the second biggest city of Transnistria. Bender is the only city that was forcibly taken by russian forces. See this video of russian tanks rolling and launching the attack on the city in 1992.

We had stops at a few memorials to the soldiers who died in the conflict, and previous conflicts during Soviet times too. There are A LOT of memorials all over Transnistria, for World War 2 heroes, Afghan War heroes etc. But this is very common all over the former Soviet Union.

Memorial with a tank, typical here 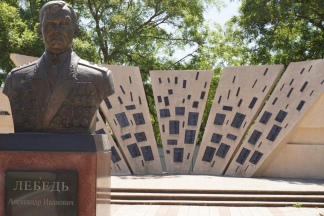 The city itself is in general not so interesting, it doesn’t have a particular communist look. But what it do have, is a giant sports complex covering no less than 3 big football stadiums and several practice fields, also for football. This, along with many other public activities and stores etc. are owned by the local mega conglomerate “Sheriff”.

The main sight we had to see in Bender was the Bender fortress. The way to this fortress is super awkward, as it is now surrounded by a former russian military base, and multiple old factories. The fact that there was russian military base here, means that in Soviet times, it was entirely impossible to visit the fortress at all, but they’re now changing that.
The fortress was constructed in the 15th century, and has plated an important role throughout history, as the fortifications of tartars, poles, swedes, moldovans, ukrainans etc. At one point the Swedish kingdom was even run from the particular castle, when King Charles the 12th fled to this site.
The fortress has an ideal location, on a hill overlooking the Dniester river, on the crossroads of many kingdoms of old. 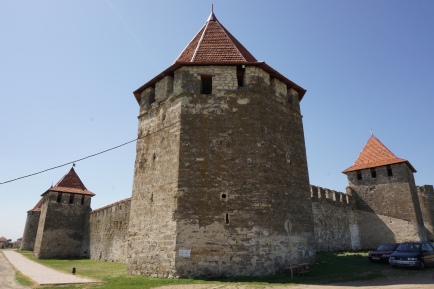 Old russian military base next door

After the fortress, we drove onwards a small ways to the capital of Transnistria, called Tiraspol.

This is a city of 130k people. It has been the main city of Transnistria since the beginning, and even served as the Moldovan capital previously, prior to Soviet times. Thus it has a historical importance in the Moldovan mind too.

When driving through Tiraspol, you don’t get an immediate feeling of being in a communist, soviet, capital. The city is not full of gray concrete blocks and brutalist architecture as you might be expecting, but rather colorful, modern and vibrant buildings. There’s also many green spaces across the city. The local population is walking around in fashionable western clothes. All in all, at a first glance you could easily get the impression that this is just an average medium sized west-european city like any other. But then the small things starts sticking out, and that illusion quickly disappears. 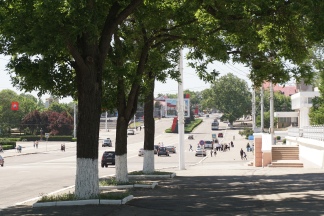 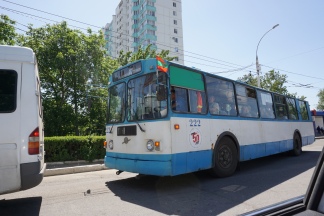 First of all, there’s russian flags everywhere in the streets. All public buildings, including the parliament and Dom Soviet building (more on the later) dons the russian flag next to the transnistrian flag. There’s multiple statues of Lenin around the city too, including a giant one in front of the parliament. 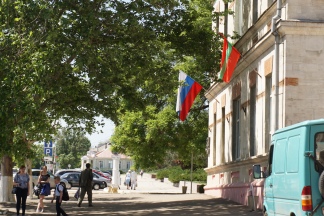 Russian flag on the parliament
Another classical sign, is the presence of bland-green clad soldiers everywhere, and tanks and other military hardware. The military is the biggest industry here, since there aren’t many jobs to be had here, many people join the military instead.
Fortunately, these soldiers are not hostile, and it is fine to take pictures of, and with them. They just, generally, will not actively pose with you, but you’re free to go stand next to them and take a picture.

Another thing you can’t help but notice, is the noticeable low number of cars in the streets. There isn’t much wealth here, and cars is a luxury not everyone can afford. Similarly, there are next to no tourists in the city as well. This was to be expected tho, as Moldova is in itself one of the least visited countries in the world, and so Transnistria is even less visited.

The main square of the city is surrounded by multiple sights. There’s the big statue of the founder of the city, the russian Alexander Surovov, who’s depicted victoriously on a horse – but still humbly dressed, we’re still in a classless society after all.

At the end of the main square is the transnistrian parliament, which is a big grey building, which dons the transnistrian and russian flags on top. A huge statue of Lenin is erected in front of the parliament, leaving you with no doubt about what kind of place you’re in.
Sadly tourists are not allowed to enter, or even get near the entrance of the parliament, but who wants to do that, when you can pose with a giant statue of Lenin instead! Oh, how he must be rolling over in his grave (well, mausoleum)!

After a small visit to a market, selling soviet memorabilia to all your hearts desire, in the form of military pins, medals, clothing, hats, patches, magnets and so on, we went on to the last major sight of the city – the Dom Soviet.

The Dom Soviet is the central congregational location for all the soviets of the country, here using the actual sense of the word, as being a small unit of people who rule over their own village. Each little village has a soviet, which works kind of like a mini parliament. Then there’s different higher soviets collecting leaders from all the lesser soviets. This continues for multiple steps until you reach a country wide level. These people meet in the Dom Soviet to discuss the progress of the country, and how to go forward. Its the same system as existed in the Soviet union. It is also important to understand that the soviet and the parliament are different entities and work independently of each other.

Outside the Dom Soviet building is another bust of Lenin, and the building itself has a big soviet star on the roof. Again the transnistrian flag is joined by the russian flag.

After the city tour, we had late lunch at a local restaurant serving ukrainin food, which was both cheap and tasty.

The trip out of Transnistria was even smoother than the way in, as the Transnistrian border patrol just waves you through, and the Moldovan patrols don’t care about you at all.

Transnistria is a curious and interesting place, even if it does feel weird and a strange to be turn a communist society and ideology into a tourist attraction. But don’t mind if i do! Selfie with Lenin time!

One thought on “A day in the Soviet pocket of Europe”